The Value of Authenticity and Repetition 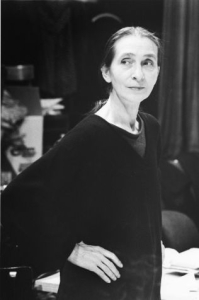 Many years ago, as a young dance student at UCLA, one of my instructors demonstrated a movement performed by one of the notable postmodern dancer/choreographers. (I don’t remember who the dancer was but I’m guessing it was the incomparable Pina Bausch, seen on the left.)

She began the movement with her back toward the audience, and then very slowly and deliberately turned to face them full on, at which point she threw her arms outward and lifted her face toward the sky as if to say, “Here I am world!” And then she turned around, reversing the movement until her back was to the audience. And then she repeated the sequence again. And again.  And again.  And again…

The first time she did the movement it was powerful and meaningful. By the fifth time it became a little boring. By the 15th time, cliché. But around the 20th time… It became art.

As with anything in life, when we do something fully and intentionally it reinforces who we are and what we believe. It sends a powerful message. And that includes the simple act of how we clothe ourselves every day.

One of the greatest values of a “uniform” – something that is repeatable and speaks to who we are, fundamentally, – is that it is

comforting to us on a deep level. (Here’s the blog post I wrote about uniforms.) But particularly as we age, continuing the thread of our personality through our attire ensures that we stay visible in a world that is constantly chasing after the next new fashion thing, no matter how crazy it is (these are from the Spring 2016 runway shows.)

My spectacular friend Dolores who turns 89 in February, is primarily a Summer type in coloring with a little bit of Spring thrown in. She is a mix of Classic, High-Spirited Exuberance and Angelic style facets. In her younger years (and by that I mean in her 50s and 60s) she wore her beautifully graying hair in a low bun. She also favored small Laura Ashley-type prints in dresses worn with her own hand knitted cardigans. I don’t think I’ve ever seen her in pants. The only thing that she has changed is that she wears her hair – now a glorious silver –  in a chin length bob, and the small scale prints on her tops and skirts, which she still loves, are a little more ethnic.

Every summer Dolores takes herself off to Tuscany to spend a few weeks with her daughter and son-in-law at his ancestral family home. Her suitcase is a child size Tommy the Train roller. It holds everything she needs: “Most of the time I’m there I’m in my bathing suit and a tank top and I just need enough room for my knitting,” she explains.

Dolores doesn’t have to wear any wild or expensive get ups to get noticed. She’s quick-witted, highly read, and a fabulous storyteller. Everything about her, from her attire to that Tommy the Train roller, says “this is who I am,” and that’s why people love her.

As for the value of authenticity – and repetition, Dolly Parton sums it up well: know who you are and do it on purpose.

Here’s to the real you!

Please sign up for my blog (see the sidebar) and get 5 free tips from Shopping for the Real You! 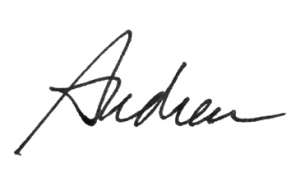 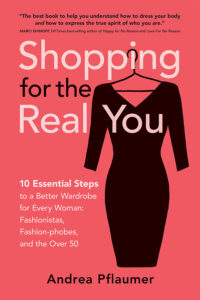 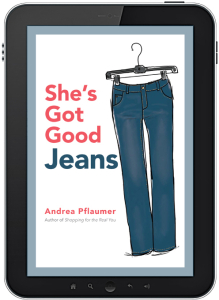 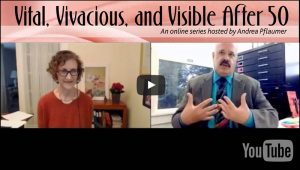 About the Author: Andrea Pflaumer

Author of Shopping for the Real You, Andrea Pflaumer, is a non-fiction writer in the San Francisco Bay Area and host of the video series, Vital, Vivacious, and Visible after 50. She has written extensively about fashion for local and national publications and is a regular contributor to the Huffington Post, Better After 50, Sixty and Me, She Savvy, and Prime Women. Her free ten-lesson course, A Lazy Person's Guide to the Perfect Wardrobe, is available on Highbrow.com. 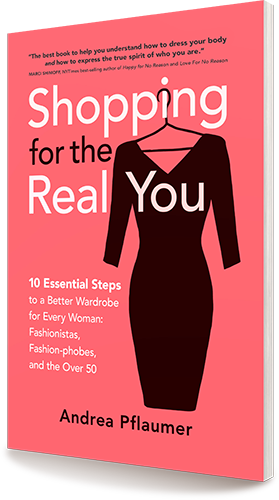 www.ewg.org/skindeep/
Find out what’s in your cosmetics

fashionfitformula.com
Learn about the best proportions for your body